This post will guide you through how to detect usermode hooks in Windows default libraries and APIs, regardless of whether they have been inserted by AV/EDR products or other third-party software.

It is a well-known phenomena that AV/EDR products or software with similar intent, such as anti-cheat products for games, utilize usermode hooking techniques to monitor the usage of vital APIs in the Windows default libraries. A hook can be designed in a variety of ways, but most commonly, they are designed as filters for specific Windows APIs that are commonly used for malicious purposes. By redirecting the flow of a function through a detour function, the parameters of the function can be analysed before deciding whether to continue execution of the original function or whether to deny access to the original function and returning to the caller.

An example of a vital Windows API that most AV/EDR products monitor is the NtCreateThreadEx function.

As can be seen in the illustration above, the function is a wrapper for a syscall into the kernel. This particular function is responsible for spawning a new thread in the context of a process, and is often used by malicious actors to execute buffers containing shellcode. An example of the same API when hooked by an AV/EDR product (in this case, SentinelOne) can be seen below.

Notice how the first instructions in the function has been replaced with a relative jmp instruction that redirects the execution flow into a function located in the InProcessClient64.dll library. Here, the SentinelOne library can analyse the parameters of the function in an attempt to evaluate whether the function is being used for malicious purposes. If the library evaluates that the usage is legitimate, they will continue execution of the NtCreateThreadEx function. However, if the library evaluates that the usage is malicious, the process will terminate and a security incident event will be raised.

Most AV/EDR products and similar software only target Windows APIs, which can be located by function name in the Windows default libraries, kernel32.dll, kernelbase.dll and ntdll.dll. However, before we can locate these functions, we must first locate their libraries in memory.

When a library is loaded by a Windows process, an entry for the library is inserted into a doubly linked list in the so-called ProcessEnvironmentBlock (PEB). We can iterate this list as shown below.

Once we have located the libraries in memory, we are ready to enumerate their export directory and thereby locate all the functions that they are promoting by name. It is obviously entirely possible to hook unnamed internal functions, but they are harder to locate as they are not being promoted by the libraries themselves, and for that reason, they are usually untouched by AV/EDR products.

In order to enumerate the export directory of the library, we must first understand the PE file format. The PE file format starts with a DOS header, which contains the offset of the subsequent PE header (also called the NT header). Inside the PE header is a DataDirectory array, which contains entries that points to various important tables, such as the export table, the import table, the relocation table, etc.

An exported function can be located by two different attributes, either by its name or by its ordinal (function number). We are specifically interested in the export directory of the PE header, which contains a variety of information, including the relative virtual addresses (RVAs) of the following tables:

We can perform all of these steps as shown below.

Interestingly, despite the fact that the export directory is inherently made for exporting functions from Dynamic-Link Libraries (DLLs), it is also possible to export constants and/or objects. Since we are looking for usermode hooks in the code section of a library, we are not interested in data objects or constants, especially since these are subject to modification, and will potentially yield false-positives when we test for hooks by comparing exports to their original variants on disk.

We can guard our enumeration against checking data objects by verifying that all of our target function addresses fall within the code region of the library. The relative virtual address (RVA) and region size of the code section of a library can be found in the PE header as shown below.

The next step is to compare the bytes of each exported function against their original unmodified versions. Ideally, we would load the respective library from disk and compare against the bytes at a given offset. Unfortunately, this produces a range of false-positives as the library on disk has not been properly set up and has not had its relocations fixed. Instead of holding on to this crude technique, we will instead analyse how these libraries are initially loaded by the Windows loader and attempt to load a fresh copy using identical functions. 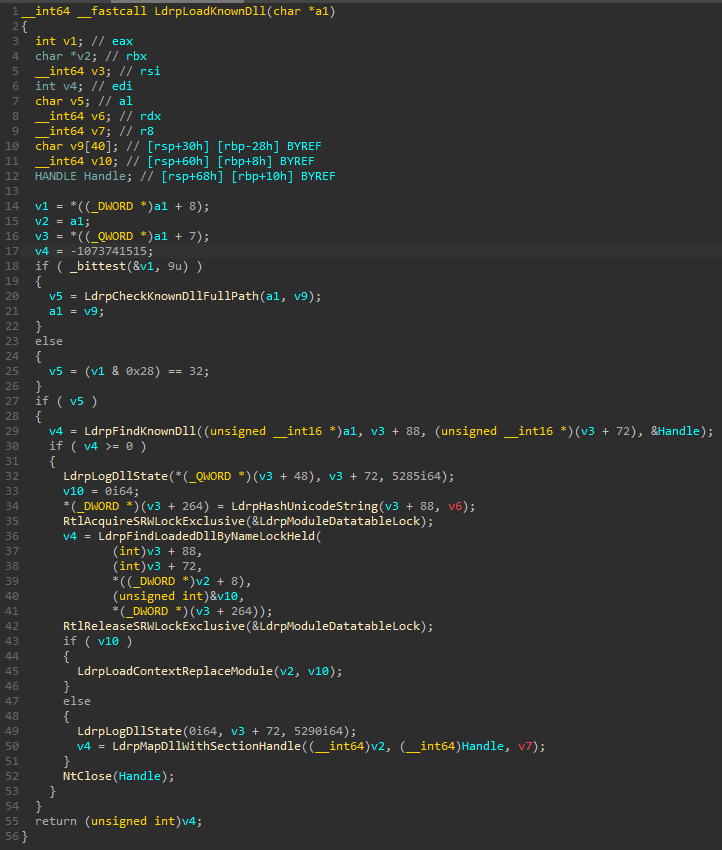 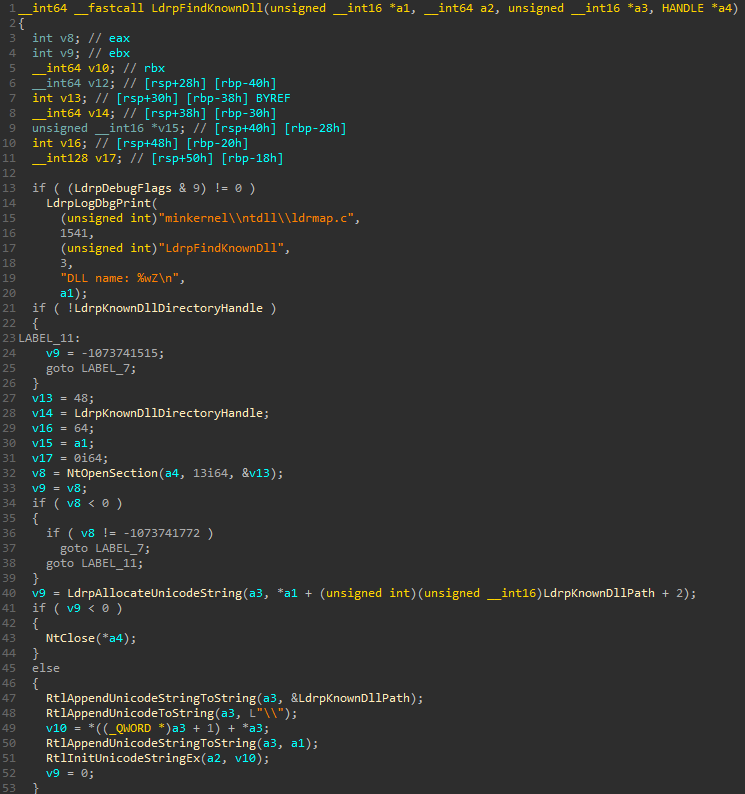 The LdrpFindKnownDll function obtains a section handle to a target KnownDLL library by invoking the NtOpenSection API with an OBJECT_ATTRIBUTES object whose RootDirectory attribute is set using an internal LdrpKnownDllDirectoryHandle object. Let us take a look at how this section handle is used to map the library into memory in the LdrpMapDllWithSectionHandle function. 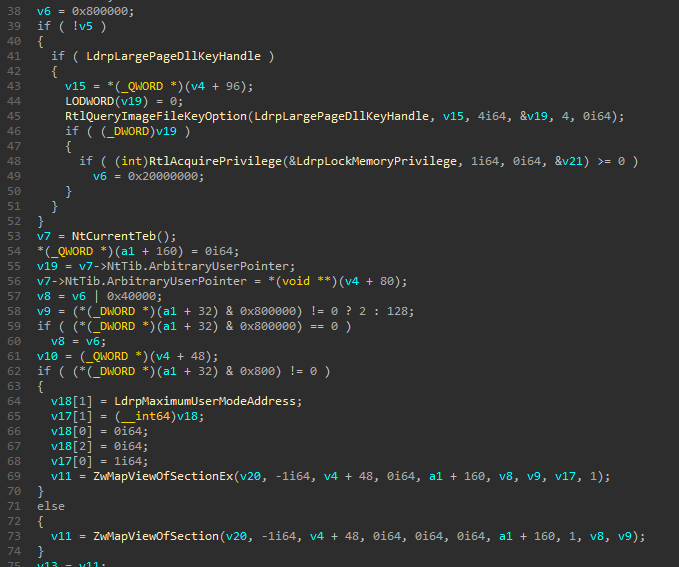 The LdrpMinimalMapModule function map the library into memory by invoking the NtMapViewOfSection API with the section handle previously obtained from the NtOpenSection API call in the LdrpFindKnownDll function.

In the 64-bit version of ntdll.dll, an exported function called LdrGetKnownDllSectionHandle does exactly what we are looking for. However, this function does not exist in the 32-bit version of ntdll.dll (or atleast the SYSWOW64 version), so we will have to create our own function. Let us take a look at how the LdrGetKnownDllSectionHandle object is constructed.

The LdrpInitializeProcess function constructs the LdrGetKnownDllSectionHandle object by invoking the NtOpenDirectoryObject API with an OBJECT_ATTRIBUTES object whose ObjectName attribute is set to a UNICODE_STRING object that contains the string "\KnownDlls" as shown below.

If we check the same functionality in the SYSWOW64 version of ntdll.dll, we observe the same thing, except the UNICODE_STRING object contains the string "\KnownDlls32" instead.

If we puzzle all of our findings together, we find that we can construct our own LdrGetKnownDllSectionHandle function as shown below.

We can use the LdrGetKnownDllSectionHandle function to obtain a section handle for a KnownDLL library, which we can then map into memory using the NtMapViewOfSection API as shown below.

The mapped library should correspond to our target library prior to having hooks installed by AV/EDR products or similar software, and we can use this as a basis for detecting anomalous bytes in exported functions of the original library.

Finally, we need to decide on limitations, such as how many bytes are checked per function. If we decide to check too many bytes per function, we might over-reach into a subsequent function in memory. When this happens, we risk false-positives about a function having been modified, when in fact it is an adjacent function that has been modified.

A relative jmp instruction, such as the one used by SentinelOne, consists of a 5 byte sequence. Since hooks are usually inserted at the start of a function, we can assume that a 5 byte limit is adequate for our purposes.

Now that we have gone through every step of the detection phase, we can puzzle our code pieces together and construct the following full sample.

In order to avoid being detected by AV/EDR products when using this tool, our techniques can be taken even further. For a demonstration of this, please visit the official project on GitHub.

If you have any questions, feel free to reach out to me on GitHub or Twitter.